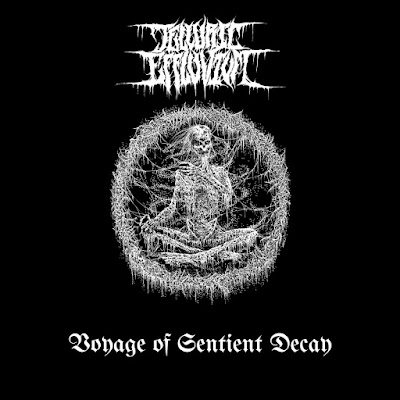 Telluric Effluvium is a funeral death doom metal band that formed in 2020 at Denver, Colorado, this project featuring members of Ghost Spawn and Monumental Discharge, they have one album before entitled Dissolution Of The Threefold Self (2020), and this year they are back and released sophomore album is called Voyage Of Sentient Decay on March 4th, 2022.
The album opens with Horrid Visions Of the Corrupting Flesh, a monumental 13-minute track that offers the ghastliness that born from music that is so gripping, its plot moves slowly spreading a fear through haunting funeral melodies, and then the gloomy tones continue to reverberate with the dark atmosphere bandage that mutated into a terror that will continue to menace until the end, then Expository Peeling comes to burst a darkness built up of a series of dreary and murky guitar riffs along with horrific vocals, this track is slow moving but its cruelty is like poison that will devour us to perish. They continue their terror on the track Asphyxiation Plague, their attacks are invisible but can quickly paralyze us with its evil musical formula, this is a form of sinister curse that born from somber guitar riffs, heavy vocals, and torturous drums. This song also evokes emotions, anger, disappointment, and sadness at the same time then wrapped into one and melted into a drifting melody, before the darker energy comes to envelop in the track Dissonant Tears, a short composition that becomes a bridge and leads us to the final track Liberation Through Cyclical Autophagia, a track that closes this album with a heavy and gloomy composition. The melody that is presented really slice us mercilessly, in other side the graceful guitar riffs dance along with the angry vocals that creating a crying musical groove that accompanying us to the final sore journey that full of misery and emptiness.
Voyage Of Sentient Decay is an album that touches the depth feels and evokes emotion and anger at the same time, they present a funeral atmosphere that rich of dark tunes filled with beauty and sadness. Layers of dark and weeping soundscape fuse with sombre harmonies to produce a haunting and sad melody, while gloomy and murky riffs thrill hearts and minds along with eerie and anger vocals. The songwriting in this album is more graceful and interesting with a good production. This is a great funeral death/doom metal album and worth to checking out.