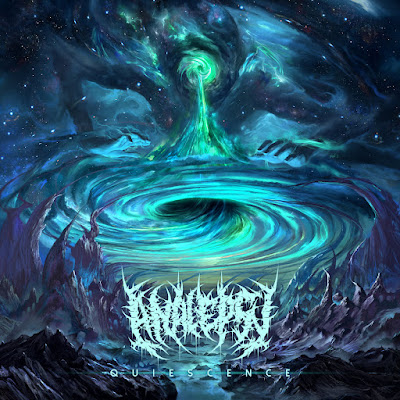 Analepsy is one of slamming brutality monster in the modern era that based in Portugal. Their debut album Atrocities From Beyond (2017) is absolutely banger that make a fantastic movement in the brutal death metal scenes and get good appreciation from metalhead, to follow up the success of their debut album they drop the second album is called Quiescence that was released on April 15th, 2022 via Miasma Records and Vomit Your Shirt.
The album begins with Locus Of Dawning, a heavy and dense composition that opens with intense distortion that is immediately met with powerful growls of vocals, while its rhythm is really solid with a crushing beat. They also added some modern touches to its guitar riffs which evoke more allure, then Impending Subversion followed with a faster structure. The brutal base fulfil all rooms with the more piercing elements and a high aggressiveness that pushes us into more violent realms, and then a sweet guitar lead pops up briefly to tempt us with enchanting melodies before being blasted again with thumping of devastating drums, continues to Elapsing Permanence, a solid track with a strong modern twist. In this track they feature Wilson NG (Facelift Deformation, Vermicular Incubation, Virginity Fraud, etc) to deliver an epic and complex guitar solo that fits perfectly with the song's composition.
Accretion Collision comes with flare up aggressiveness by putting technicality at an effective level of rage. Dense, sharp, and complicated guitar riff attacks take turns torturing us along with heavy bass, crushing drums, and insanely savage vocals, while its fiery guitar solos come to burn our adrenaline with blazing complexities, then Stretched And Devoured hit us with a heavy punch, this song features Angel Ochoa (Disgorge, Abominable Putridity, Cephalotripsy) who terrorizes us with his vocal cruelty that will continue to haunt us. And then the amazing guitar solo appears and managed to muffle the violence that they continue to present with its softness of the indulgent melody, before the aggressiveness stomp again when Converse Condition arrives to mosh our heads fastly. A simple but highly effective song to shatter our skulls with destructive grooves, then complex guitar solos arrive to reveal technicality and poison us with wild tunes, followed by Fractured Continuum with the same recipe and texture comes along to build a tight, weighty, and devastating riff. Some of the heady lead parts find their way into a massive wave of violence, while Spasmodic Dissonance attacks and destroys us with the help of Ricky Myers (Suffocation, Disgorge, Sarcolytic, etc) on vocals. This song has a solid and dense structure with some strong technical elements embedded in its attractive guitar, bass and drum rhythm.
Edge Of Chaos, a song that puts a darkness and complex elements at its main power, they offers a series of enchanting guitar solos that manage to amaze us with jaw-dropping melodies, before a haunting outro leads us into Quiescence that closes this album very gently through a dramatic and melancholic instrumentation, then several female choirs placed together with a magnificent orchestra that accompanies us to the end of a strenuous and torturous journey with a calming peace.
Quiescence is a very different slam album, they managed to break through a boundary beyond the style of slam music as we know it. In this album they offer more varied musical compositions and are easily accessible to all extreme metal fans, by adding modern, technical, and melodic recipes to its musical arrangements they managed to create extraordinary masterpieces with complex and heavy songwriting. You will be spoiled with an array of dazzling and astonishing guitar solos that you won't find in any other slam music. Really eargasm album.