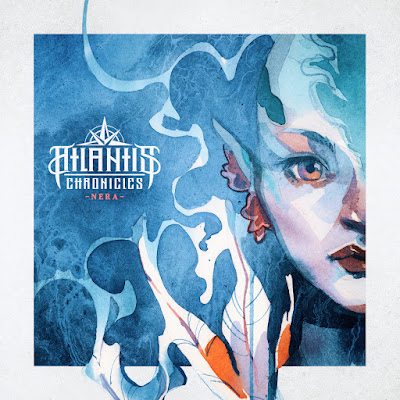 Atlantis Chronicles is one of my favorite band since I was listened their previous album Ten Miles Underwater (2013) and Barton's Odyssey (2016). If you don't know them, they are Technical melodic death metal that formed in 2010 at Paris, France. This year they are returns and release their most anticipated third album is called Nera on April 8th, 2022 via Metal East Productions.
The album begins with Full Fathom Five, a track that opens with a very soft and melancholic introduction with a fast rhythm. Its vocal performances are perfect harmony with its complex musical structure and intoxicating melodic parts that will spoil us until the end, then The Drowned And The Saved came with an interesting groovy, aggressiveness in the rhythm part was really interesting with a jerky guitar riffs, beautiful bass, and energetic drums, while its snaking guitar solo managed to amaze and make us hypnotized again with a strong allure, before A New Extinction bombards us with chaotic melodies and tight technicalities that let them create a raw sonority, then solid modern pieces crumble into powerful riffs that accompany us to We All Saw It Coming offers us epic and majestic tunes to accompany the rhythmic energy, then slowly the song explodes with powerful vocal beats along with dashed guitar riffs and heavy drums, that revealing a modern progressive influence. What I love here is the acoustic guitar sections which sounds very sweet and melancholic which gives a soft comfort, then followed by the lilting guitar solo that appears to pamper us with a sad rhythm. Obsolete Bodies, a song that has such a beautiful and mesmerizing intro, then they suddenly startle us with vocals filled with flare anger. This song moves fast with its crushing beats and such a romantic rhythm that radiates from its captivating guitar solo, then Ruins And Memories comes with its aggressiveness, this song emphasizes clean vocals that are heavy and worrying against a background of mysterious melody and piercing technicality that brings us to a false serenity, before The Great Escape arrives to possessing our minds with a very strange ambient part and then exhale a dramatic soundscape that connects us to The Great Inscape, a song that has a swell of powerful guitar riffs that creeps up to greet the piercing leads before a solid clean vocals unleash its enticing charm, then the superb bass performances provide the perfect bridge for the emotive vocals, and an invigorating guitar solos that greets us with its graceful melody. This song has a heavy structure with a very strong progressive foundation, then slowly the sound fades and leads us to The End Is Near opens with a calming chorus, before stomping along with terrifying vocals that wrapped in sharp and cruel technicality. The structure is quite chaotic and heavy which is fused with exciting rhythms and thunderous beats. The album concludes with Fatherless Nights Ahead, a track that offers fast, thick, and heavy riffs along with attractive vocals and solid drums. And then the song moves towards the end with an impressive rhythm that will hypnotize and leave us in an empty dimension.
Nera is an album that evokes a strong imagination and stirs the deepest emotions through a mix of aggressive technical death metal and impressive melodic death metal with a touch of progressive metal and metalcore here and there. Its compositions are very exciting by featuring a series of complex, thick, fast, and sweet guitar riffs, excellent bass performances, solid and attractive vocal combinations, and energetic drums, while its guitar solos are so captivating, invigorating, and heart-touching, that never stop spoiling us in every its presence, then there are some melancholic and epic acoustic guitar parts that further amplify the arrangement. The selection of tones on this album is more fresh, dynamic, and catchy with brilliant songwriting and outstanding productions. Overall I really love what they present in this album, it's a very impressive album.