Review: Beyond Mortal Dreams - Abomination Of The Flames (2022) 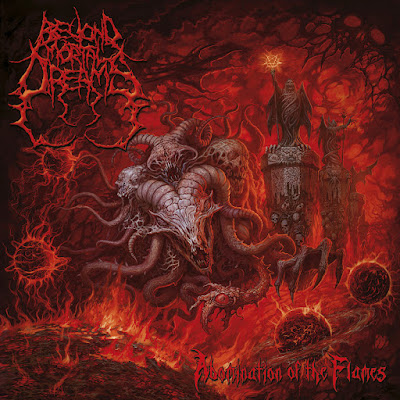 Beyond Mortal Dreams is a death metal units from Australia that formed in 1995, they return and released their sophomore album is called Abomination Of The Flames on April 15th, 2022 via Lavadome Productions.
The album begins with Abomination of the Flames, a straightforward track that strikes immediately with sharp and cruel guitar riffs then followed by a winding guitar solo that creates a dark atmosphere that will continue to permeate every side of the track, then Hell of Eternal Death comes to gush a powerful rage, it will be felt in its very aggressive musical structure offering a parade of fast and complex guitar riffs, thick bass, crushing drums and terrifying vocals, while its blazing guitar solos constantly burn us down with its fiery melody, until Deficit in Flesh terrorizes us with its haunting rhythm formed from its menacing melodic passages and complex technicalities. This track moves with a terrifying force that will continue to gnaw at our minds and feelings with this savage composition, then its voice slowly faded and disappeared into the void, before They Are Seven overwhelming us with a bunch of astonishing guitar solos, where we will be faced with various forms of complexity that are executed at high speed that shoot like lightning that strikes anything unmercifully. Decimation Hymn, a track that has epic structure that spewed into a heavy and evil guitar riff, while its melancholic guitar solos constantly torment us with painful melodies. It's a track that evokes emotion and anger laced with an unsettling atmosphere, that allowing the band to create a dramatic sonority, followed by Misanthrope Messiah who pounced us with devastating beats that formed by a string of intricate and incisive guitar riffs, along with heavy bass, energetic drums, and horrific vocals. This track has a strong threat through its piercing guitar solos that delivers a cruel melody and vile technicality that will continue to tear us apart until the end, until finally we arrive at the end of the whole show with the arrival of Peace Through Annihilation which spreads the ultimate threat with a series of sharp, complex, and tight guitar riffs that are executed very aggressively. Meanwhile its soaring and astonishing guitar solos constantly punish and torture us with twisted melodies and technicality until the final, what a dramatic ending.
Abomination Of The Flames is an excellent performance from a long slumbering monster, it's a great comeback album that features a very solid death metal show with a vicious technical touch and a menacing melody, we'll be hypnotized with a series of epic, fast, incisive, and complex guitar riffs, along with heavy bass, energetic drums, and ferocious vocals, while its twisting and astonishing guitar solos never cease to amaze us with fantastic notes concocted with an intoxicating rhythms and aggressive structures. What an appetizing album with straightforward songwriting ad perfect productions, worth checking out.