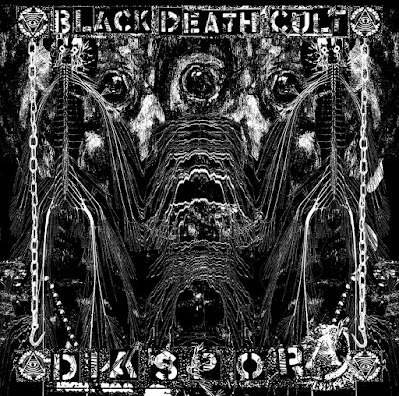 Black Death Cult is a death metal band that based on Canada, this band was just released the second album is called Diaspora on April 1st, 2022 via Profound Lore Records.
The album opens with Neon Cross, a lengthy track that conveys cruelty in its nearly nine minutes of landscape. This song begins with a synth horror is thrown to shroud the music into a dark atmosphere, before a terrifying howl of vocals breaks the silence accompanied by surreal instrumentation that born from the chaos and complexity of the guitar performance, while the bass plays is astonishing with the heavy notes that share the space with energetic drums to create unstopable destruction, then followed by Knights Of The Headless Order, an excellent example of the psychedelic side on this album. The riffs that are displayed are so difficult to digest that come with a loud rhythm and a worrying structure, be a base for them to produce a very uncontrollable sound. This is a track that has advantages in terms of quality psychedelia that you probably won't find anywhere else, then a dark sampling section at the end of the song connects us with the Bloodworms who instantly poison us with a powerful dose of doom metal that fused with unsettling dissonance, and delivers a terrible howl of vocals throughout the song. This track features the hard-to-digest passages when a chaotic appear through a guitar leads that formed from a touch of abrasive avant garde elements with strong progressive foundations that explode together to create massive destruction, before a sinister howl greeted the arrival of River Of Death, where a dark and swirling melody burst through and pierced the boundaries of darkness shrouded in a thick atmospheric mist that clung to the walls of uncomfortable dissonance, then moved forward with the chaos that created from a series of its somber and murky guitar riffs mingled with shattering drums against a sordid synth backdrop. This is the longest track featured on the album, allowing the band to create an abrasive sonority with all the spices that appear in this song. Inverse Moon, a short composition but has a heavy structure with a unique clean vocal performance that reveals the surreal side to be more prominent with interesting instrumentation accompaniment, this track also serves as a connecting bridge to the next track The Fractal Conspiracy closes this album with the terrifying power created by a filthy, dreary, chaotic, and somber death metal composition. This song has an intoxicating rhythm with crushing beats and varying tempos. And then its slashing guitar solo arrives to sink us into the abyss of misery and leave us in endless sorrow and void.
Diaspora is a surprising and amazing album, I was made to fall in love with what they have to offer on this album. From start to finish, it felt like an awesome journey with a sensational listening experience. Each track that is displayed, we will find new elements introduced to keep our minds lulled with all the temptations. Their music is an excellent mix of filthy death metal and bleak doom metal with elements of weird progressive, chaotic experimental, quirky psychedelic, uncomfortable dissonance, murky avant-garde, menacing melodic, and horrific synths. The songwriting is outstanding with lots of heady rhythms and crushing beats. It's an album full of surprises, I'm sure I'll have to listen to this album continously to get an eternal satisfaction.