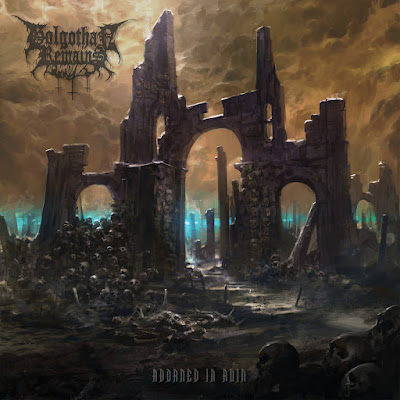 Golgothan Remains is a death metal band that formed in 2015 at Sydney, Australia. This band was released new album is called Adorned In Ruin on April 1st, 2022 via Sentient Ruin Laboratories.
Veneration Of Carnal Blasphemy opens this album with a savage, a roar of dissonant guitar riffs echoes along with the gripping embrace of blackened death metal. The musical structure that is displayed is very scary and even more goosebumps when a horrific vocal howl appears like a sinister devil's call, followed by A Shrouded Longing For Promethean Fire with a more exciting rhythm, that is felt when bursts of gloomy dissonance blend into its catchy guitar parts, that creating a dashing and menacing composition. This song continues to move towards a more violent realm with unstoppable aggressiveness, then Wandering Through Chambers Of Deathlike Void comes to hit us with a heavier blow, this song is like a deadly poison that will kill us with a strong dose of cruel dissonance that lingers in every joint of the arrangement. Opulent Incarnation Of Persevering Torment, a track that stab with high-aggressive attacks that born from a series of vicious guitar riffs, terrifying vocals, heavy bass, and devastating drums, all executed with murky dissonance and a sinister atmosphere, then The Malign Hordes Of Abhorrence comes with varying tempos as if to bring worrying catastrophe that embedded into its chaotic and frightening dissonance, while its cruel vocals incessantly spread fear that continues to haunt with the torturous instrument composition, then slowly fades and brings us to the track Forgotten Lores Of Hatred And Bloodshed which has a more menacing construction that built from the attacks of incisive and somber guitar riffs that form a deadly distortion. We will be taken to enjoy an intricate dissonance that is performed with an intoxicating rhythm and will hypnotize us to the end, then …Of Morbid Blood And Serpent Skins come to attack us with increasingly enhanced aggressiveness along with smoldering dissonance, this track continues to move at a velocity that melts with the darkness that will create chaos and destruction, before Void II: Towards The Joyless Elysium arrives to deliver a misleading message that loaded in a gripping melody and a troubling prologue which immediately transitions to the track On Lifeless Wings Of Malice which closes this album with all the anger that has peaked and ready to be spewed into a devastating ultimate attack. This song drive with a dark dissonance that continues to dance on the destruction that will lead us to the end of a journey full of misery and void.
Adorned In Ruin is a diabolical, murky, and chaotic album. Musically they showcasing blackened death metal that fused with a very dark and threatening dissonance. The musical structure is incredibly aggressive that built on a series of sharp, fast, and somber guitar riffs, heavy bass, terrifying vocals, and devastating drums. The songwriting is wild with tight production. It's an album that takes listeners on a harrowing journey filled with cruelty and torture.