Review: Optical Delusion - The Forbidden One (2022) 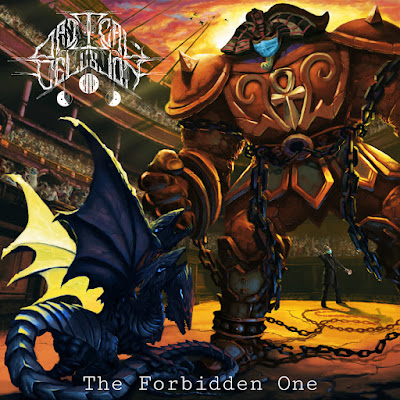 Optical Delusion is duo technical death metal project that formed by Andrew Harrison and Jake Lilje in 2020 at Clemmons, North Carolina, this project was released debut album is called The Forbidden One on April 15th, 2022.
The album opens with Dark Hole, a mysterious introduction that carries an unsettling sound that connects us to Reigeki, a track that has a heavy and dense structure, consisting from a series of chaotic and messy guitar riffs that supported by some instrumental touches such as a wacky saxophones and unique sampling thus creating a strange and worrying composition, then Dragon Capture Jar overwhelms us with intricate and crude guitar riffs that form a horrifying threat along with heavy bass and horrific vocals that continue to dance together to torment us with an oppressive beat, followed by Pot Ov Greed which offers an intricate intros with its twisting and winding melodies that connects us to the bending technicals and chaotic progressives, the song moves with a messy structure that creates an irregular sonority, before Spirit Ov The Harp terrorizes us with its hortific energy shrouded in gripping nuance and raging rage, while its complex lead guitar emerges to carry a disturbing threat, followed by The Witty Phantom who brought diversity to its musical texture which adopted many unique Nintendo synths and some complicated and rough technical chords, and then The Forbidden One Part I: The Five Pieces comes to rekindle the madness carved into its sensational guitar work with its chaotic synths and raw groovy that slowly leads us to The Forbidden One Part II: Obliteration, a track that has an irregular structure, sometimes offering soft chord, sometimes aggressive, and sometimes chaotic that executed with varying tempos, that make this track is hard to predict its plot, and the album closes with Uroboric Forms, a song of Cynic that is performed and played in their own style that creates the different sensation of the original song.
The Forbidden One is an album that bring Yu-Gioh themes and has irregular, aggressive, and hard-disgest musical structure and texture, they feature an insane mix of technical and progressive death metal that served up with complex, chaotic, messy, and bending guitar riffs along with some parts of wacky saxophone and Nintendo synths that are unique and weird. This is an album that takes listeners on a cosmic journey that breaks through normal boundaries and connects us to another dimension that is strange and quirky. You should check this album, if you need something crazy and exciting.