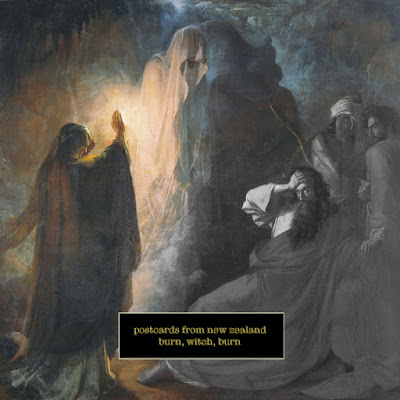 Postcards From New Zealand is an unique entity that borned in New Zealand, this band was released new album is called Burn, Witch, Burn on April 15th, 2022.
The album begins with Who's Wearing Pants, a short composition but they present a deep horror with dark technical performances and a gripping atmosphere, followed by On A Silver Plate which has a heavier structure formed from sharp guitar riffs, dense bass, powerful drums, and cruel vocals that executed to create an unsettling scare, then All The Same comes offering an eccentric and chaotic progression with dirtier vocals, the structure is so messy that it's not easy to access and digest, while Pinky Swear emerges from a more aggressive realm, they terrorize us with a composition that is so threatening and terrifying with filthy and muddled guitar riffs, energetic drums, and furious vocals, and let Soccer Mum come up with its contemporary style that enchants us with some awesome acrobatic riff pieces, they fuse vile technique with evil progressive black metal shrouded in a sinister atmosphere, and this track blazes through to the end with impassioned gusto, then Pill Fight infiltrate into the show with a gloomy composition, they try to slow the tempo but don't get rid of its scary side at all, this track reveals some murky doom metal influences and manages to transform into a fear that will continue to haunt, it's different with Dead Skin Care which shoots very aggressively and explodes with a composition of instruments that are so heavy and dense, even though they start at a slow tempo but in the middle, they surprise us with a savage speed, then the Holy Bazongas stomping with a fast and aggressive structure, where riff after riff moves in and out in savage way. This song features a blend of complex technicality with worrying dissonance, which slowly leads us towards Themiscyra, a track that breathes unsettling black metal with a thick compositional texture and has a gloomy sound wall, also a strong progressive foundation, this song moving front then fades and connects us with Burn, Witch, Burn which closes this album with a slow and shuffling tempo that focuses on the darkness that continues to envelop. This is the longest and at the same time the darkest track presented on this album, allowing the band to release and explore its anger at such a frightening level, and slowly the overflow of emotions dissipated and disappeared into the void.
Burn, Witch, Burn is an incredible offering and a very unique style of music. Musically, this album offers a crazy black/death metal performances with complex, filthy, murky, and vile technicalities that melded with chaotic, eccentric, energetic, and dreary progressives, along with a gripping atmosphere and some unsettling dissonance. The musical structure is weird and messy featuring a series of fast and aggressive guitar riffs, excellent bass performance, heavy and torturous drums, as well as raw and horrific vocals. I really enjoyed every side of this album with its weird and quirky songwriting and barbaric production. It's probably going to be an album that will share our focus with so many taste and variant, but I think a lot of listeners will love this album.