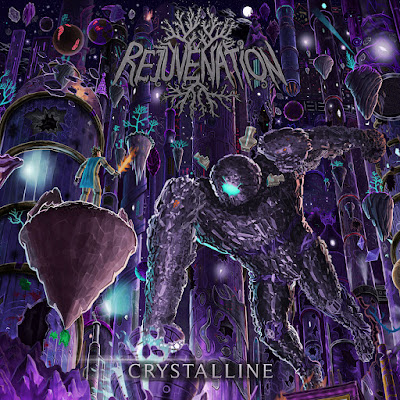 Rejuvenation is a technical death metal band that formed in 2014 at Sofia, Bulgaria. This band just release the debut album is called Crystalline on April 4th, 2022.
The album opens with Crystalline, a majestic and melodious introduction that begins our journey to explore the depths of the music they have to offer, and this song connects us to The Darkest Depths, a song that has a catchy structure and a heady rhythm. They cook their musicalities with sharp technical recipes and immersive melodies through the composition of tight and thick guitar riffs, beautiful bass playing, energetic drums, and straightforward vocals. They also insert some classical guitar parts that spoil us even more with the beauty that continues to surge, before Ethereal came to shake us with the grace of its melodies that mixed with the polite complexity of the technicality they carried, while its snaking guitar solo manages to hypnotize us with its mesmerizing notes on top of its heavy musical structure. Fire & Ice, a stomping track with superpowers, the song moves with high aggressiveness featuring a barrage of dense and powerful guitar riffs, furious vocals, heavy bass, and thunderous drums, while the captivating guitar solos arrives to touch us with its enchanting melody. This song is executed very cruelly but doesn't lose the beauty of that own music, then Diamond Heart strikes with a torturous technicality centered on its fast and intricate guitar riffs, excellent bass, and energetic drums, the song also features some beautiful leads that emerge between the cruelty and craziness of its explosive music. And the fire burns even more, as a parade of fantastical guitar solos emerges to indulge us with a variety of entertaining tunes, before the Time Reversal appears to deliver a lethal sting. This is a short composition but the beauty of the melody really fascinates us, and the album closes with Paradise that has a dense, tight, and aggressive structure. This is a song that executed with a crushing beat and fused to a soaring rhythm. It's the longest track on the album, allowing the band to launch their ultimate attack by exploding all the rage that has built up through a deadly composition.
Crystalline is an extraordinary show, they delivering a beautiful blend of technical death metal with an enchanting and menacing melody. The musical structure is really tight, dense, and heavy that executed with an intoxicating and hypnotizing rhythm. The songwriting is outstanding and the production is amazing. This is an album that worth consuming, especially for tech-death lovers should check this one.