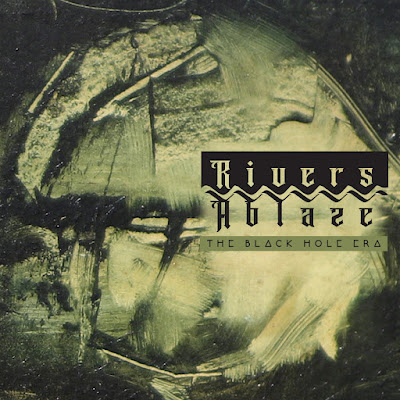 Rivers Ablaze is a progressive black/death metal band that formed in 2019 at Budapest, Hungary. The band just released the third album is called The Black Hole Era on April 15th, 2022 via Metal.Hu.
Cosmic Venture Arch begins this album with a bleak melody, bringing darkness shrouded in unsettling dissonance, then its eerie vocal howls make the atmosphere even more tense, before heavy distortion breaks the silence that followed by dense and complex guitar riffs, incisive guitar leads, and some excellent clean vocals that reveal a strong progressive element, then Vortex strikes with an energy of fierce technicality accompanied by an excellent dual vocal of ferocious screams and heavy clean vocals, while its guitar work is simply amazing with some stabbed and menacing melodic touches. The structure of this song slowly becomes very dense and chaotic which culminates with high aggressiveness until the end, before Perished Fountains of Life haunts us with its sinister black metal elements, bewitching us with a series of dark and dreary guitar riffs, gruesome vocals, heavy bass, and torturous drumming. The rhythms offered are so hypnotic with rough beats that crush us savagely, while its complex guitar solos come to anestheize us with intricate melodies which leads to Stellar Suffering with its mystical and cinematic voices that become the link for us to meet with Descending, a song that has a thick and heavy texture that played by strong distortion and a string of dense guitar riffs. This song brings elements of modern progressive metal that combined with a menacing melody and a gripping black metal aura that conjured into a diabolical show that curses anyone close to it, then slowly fades with a dreary tones accompaniment and leads us to The Claiming which arrives to give us a quiet introduction then stretches into a splendid show with an indulgent parade of lead guitars, before exploding into a lethal assault led by its horrifying vocals alongside dazzling guitar work, splendid bass performances, and very energetic drumming. The song moves forward with a varied tempo that captivates us with its seductive rhythm, and let the Giants of the Sky infiltrate and possess us with a dramatic and melancholic soundscape and then disappear into nothingness, before Unholy Expanse closes this album with a disturbing dissonance and then stomps with such high aggressiveness that its rage mounts to detonate all the terrifying ultimate power. Then a contemporary section emerges to entertain us with some astonishing guitar solos, before sprinting back at high velocity towards the end of a memorable journey.
The Black Hole Era is an album that blends solid death metal and black metal ferocity with a modern, contemporary, classic, and solid progressive elements, a menacing and haunting melody, as well as some unsettling dissonance. The structure of the songs is varied, which comes with high aggressiveness, thick and chaotic that presents a bunch of sharp, intricate, dreary, and dark guitar riffs, excellent bass performances, energetic drums, and horrific vocals. This is an impressive album with incredible songwriting and outstanding production.