Review: The Spirit - Of Clarity And Galactic Structures (2022) 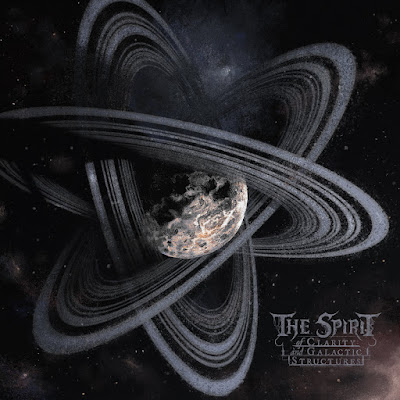 The Spirit is duos black death metal metal project from Germany that formed in 2015, this band was released the third album is called Of Clarity And Galactic Structures on April 29th, 2022 via AOP Records.
The album opens with Of Clarity And Galactic Structures, a song that instantly delivers a big waves of rage that stretches along with a somber melody and a hypnotizing progressive twist that executed with an intoxicating rhythm under an eerie howl of vocals, the song moves with a great dynamics and slowly take us to The Climax Of Dejection that stomping with strong energy and an aggressive structure, this song presents an incisive melody that is fused into a solid base with some anesthetizing parts, supported with angry vocals and fantastic progressive foundations this song transforms into a frightening threat, before Repression delivers an eerie terror through its haunting melody, the song has a slower, colder, heavier structure that focuses on its slashing and drowning harmonics that formed through a series of dark guitar riffs, elegant bass performances, and devastating drums, this song continues to blow its temper until the end, then Celestial Fire reveals progressive elements that are more straightforward and catchy. This song has energetic parts that ignite our spirits to keep burning with its fiery melody, until Transition arrives giving us a tranquil session with some cool harmonics allowing us to breathe for a moment, before Timbre Of Infinity came to blow the rage back with a cruel and abrasive composition that morphed into violence and allowed darkness to creep into its fast and dreary guitar riffs, where the vast dissonance and straightforward melody fit perfectly with its raw of song base, then Arcane Wanderer comes with its occult and magical tone shrouded in a dark atmosphere and evokes an epic nuances through its catchy and crunchy guitar riffs, powerful drums, and solid vocals. The song goes on with great dynamics that stretches to form a hypnotic rhythm and an immersive groove, and then pushes us towards Laniakea that closes the album with its enchanting and dazzling melody, this is an instrumental track that has a slower tempo and dense structure. They bring some modern and interesting touches that slowly fade and disappear into a dramatic ending.
Of Clarity And Galactic Structures is a sensational album, they present blackened death metal music with a stronger progressive touch and a more haunting melody. They managed to bewitch us with a series of epic, occult, and mysterious tunes that poured into a dark, gloomy, and fast guitar riffs along with solid vocals and powerful drums. The songwriting is fantastic and brilliant with intoxicating rhythms, immersive plots, and crushing dynamics. Its song structure is varied, sometimes aggressive, slow, and even colder. This is an album capable of evoking emotion and anger with terrifying energy being blown out at the same time. What a glorious album, with supported by an excellent production.