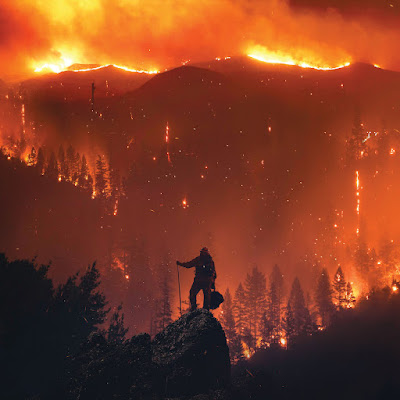 Terzij De Horde is a progressive/post black metal band that formed in 2010 at Utrecht, Netherlands. This band just release their sophomore album is called In One Of These, I Am Your Enemy on April 8th, 2022 via Consouling Sounds.
The album opens with Cheiron, a track that immediately envelops us with the terrifying aura of feverish black metal that fused with a strong progressive touch, making this track even more solid and weighty. It's like an outburst of hatred and anger that born from its really cruel music that will explode until the end, then followed by In One Of These, I Am Your Enemy, this is a longer track, the band tries to maximize their black metal style by combining several elements into a terrible composition. Part after part displays a colourful diversity of tones with impressive shift in tone, sometimes we are taken to an atmosphere full of anger and burning emotions but for a moment they drown us in sadness, despair, and deep misery, and sometimes we are also led to an altar darkness filled with evil that will continue to haunt. The album closes with Precipice, a track that comes with a rage that rises to a ferocity through its compositions built on the brutality of progressive black metal fused with somber post metal, worrying dissonance, menacing melodies, and chaotic hardcore. Everything is executed with high aggressiveness and a truly deadly rhythm. It's the longest track on the album, allowing the band to unleash all their emotions and unleash all their might to create the ultimate devastating attack. Then slowly this track creeps and drags us into the void that will envelop all the suffering that has been presented.
In One Of These, I Am Your Enemy delivers a vicious amalgam of progressive black metal and post metal melded together with menacing melodies, unsettling dissonance, and some chaotic hardcore touches. All of them are executed very aggressively through a series of chaotic, murky, and intricate guitar riffs, incredible bass, devastating drums, and an eerie vocals. This is like an overflow of emotions, anger, despair, and sorrow that are condensed into a terrible form that is kept in a sick vessel that full of cruelty and darkness that will haunt until the end.