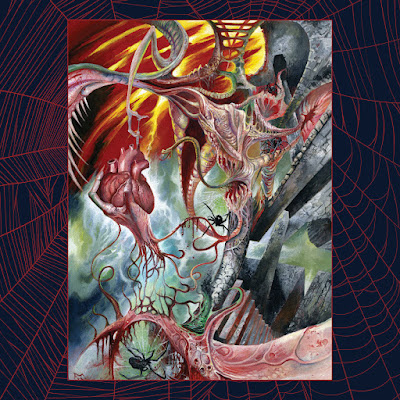 Thos Ælla is a melodic black/death metal solo project that formed by Derrik Goulding (Father Befouled) in 2020 at Georgia, US. This project just released the sophomore album is called Sempiternal Mobocracies on April 22nd, 2022 via I, Voidhanger Records.
The album opens with Gazing Into The Eyes Of Faithless Servants, a calm and epic introduction that gives us a peaceful scenenary and a soothing feel, before Transcending Chronology Towards An Inexorable Future came with high aggressiveness through a series of fast and catchy guitar riffs, this track offers a fiery melody with a fierce progressive heavy metal elements that is brilliantly executed with a very threatening structure, while the rhythm is very intoxicating that makes us fly in wishful thinking, then In Vein, The Oceans' Black featuring a very fun intro with an exciting melody, then slowly moves in a more violent direction with a blazing fast structure that delivers an onslaught of sharp and piercing guitar riffs, energetic drums with a crushing beat, also a passionate vocals that veint its anger, followed by Backwards Afterbirth Flows Unto Dreaming Temples, a track that opens with a melancholic introduction, then slowly moves into darker realms with melodic twists and turns at varying tempos, while its intricate guitar solos form a connectors towards This Firestorm Of Retribution which has an aggressive structure and reveals their reckless side with strong thrash and heavy metal elements that continue to stretch into a frightening threat, then By The Night's Embrace Eternal rages again by launching a ruthless attack of black metal smeared in a piercing melody that continues to resonate until the very end, while its attractive guitar solo delivers an extraordinary performance and amaze us with its blazing and alluring tunes that based by such a solid progressive foundation, continued by Bloodlust Inamorata, a song that has a very pleasant rhythm with seductive beats, its structure is very dense that embellished with catchy and epic guitar riffs, while the charming guitar solos constantly hypnotize us with astonishing melodies, before Winds Of Pestilence Carry The Dust Of Angelic Bones stomping with blazing energy, they launch an attack through a series of dense, intricate, and incisive guitar riffs that dance together with heavy bass, blaring drums, and powerful vocals over its sturdy musical structure, then the attack slowly subsided and led us to Deep Within The Hexevoid, For Seven Aeons Slept, a track that bewitch us with a fantastic and bombastic melody with a very intoxicating rhythm. The musical structure is very aggressive and menacing by blending several elements into a captivating performance which will continue to pamper us until the end, before Conjured To Conquer (We Drink From The Chalice Of Triumph) arrives to close the album with great enthusiasm, the track delivers an incredible mix of vocals with enchanting melodic accompaniment. This is the longest track on the album that allows the band to showcase all the skills to indulge us with memorable melodies and form an epic sonority that will reverberate and lead us to the end of this sensational journey.
Sempiternal Mobocracies is a perfect amalgam of various elements, such as black metal, death metal, thrash metal, heavy metal, and progressive metal which is executed brilliantly with an epic and attractive melodic recipe that wrapped in a very aggressive and menacing form with a rhythm that are intoxicating, exciting, and enjoying. The songwriting is ambitious and complex with a fresh and energetic approach. In this album we endlessly spoiled by a string of dazzling, captivating, invigorating, and astonishing guitar solos. It's a fantastic album that has a wealth of enchanting and evocative melodies that will blow our minds in incredible imaginations and fantasies.