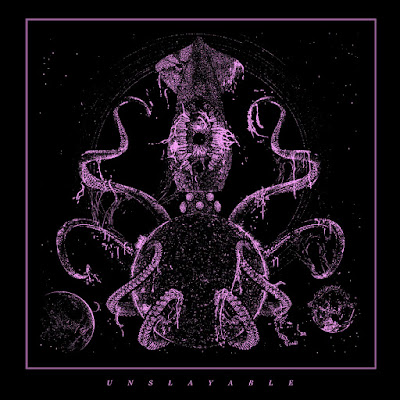 Tyrannus is a Blackened death thrash metal that formed in 2018 at Scotland. This band will be release their debut album is called Unslayable on April 22nd, 2022.
The album opens with A Cruel Dream, a gloomy introduction that evokes an aura of darkness shrouded in a gust of sinister atmosphere that connects us to A Worse Reality, a song that has an intoxicating rhythm with a very dark song structure, the guitar riffs that are presented like a knife ready to tear anything, that supported by scary vocals and torturous drums make this song be one of the most dangerous tracks on this album, then The Flood stomping with a heavy beat, the song moves to an eerie rhythm that builds from a series of dreary and murky guitar riffs, while the worrying guitar solos are here to evoke an unsettling atmosphere until the song ends, before It Taketh attacks with high aggressiveness, the melody that is presented is cruel and haunting that reveals the viciousness that continues to threaten, then the piercing guitar solo comes to make the atmosphere even more gripping when the terrifying vocal howls are greet with great anger, and let the band create a fear that will continue to envelope, so Lake Of The Undying arrives for a moment to give us a chance to breathe and force us to inhale a dark notes that are presented in this gloomy interlude. Unslayable comes with a fiery thrash metal spirit that fused with the evil embrace of black metal and a strong death metal foundation. This song comes like a bullet that released from the trigger that moves fast, violent, and deadly, then a misleading guitar solo is played very progressive to create massive chaos until the end, this is a hard-digest part, while Light The Last Sun appears with the ferocity of black metal that is ready to devour anything with a cruelty that is increasingly culminating with anger and emotion that is overflowed with a composition that is truly worrying. The song has a fierce structure with varying tempos and confusing plot, then slowly this track fades to provide a place for Break The Will Of Evil to close this album with ever-increasing aggressiveness, this is the ultimate attack from a band that uses a recipe from a velocity, ferocity, and cruelty that served with spices from a collection of dreary guitar riffs, powerful bass, energetic drums, and scary vocals. Then an incisive leads comes at the end of the song to accompany us to the end of this gloomy journey that slowly melt into a void.
Unslayable is an exciting album, they provide a dangerous treat of a scary mix between black metal, death metal, and thrash metal that served with the right dose, not excessive and not boring. You will be presented with a series of fast, dark, and somber guitar riffs, heavy bass, torturous drums, and terrifying vocals, while the guitar solos feature worrying, unsettling, and disturbing melodies that perfectly match with the structure of their music. This is an album that ignites emotion and anger that shrouded in menacing darkness.