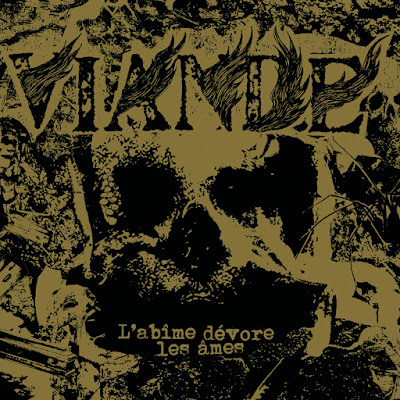 Viande is an atmospheric death metal band that created in 2013 at France. The band was released debut album is called L'abime dévore les âmes on April 15th, 2022 via Transcending Obscurity Records.
The album begins with Les Dents Du Gouffre which opens with an unsettling intro, then the song moves forward with an oppressive rhythm that shrouded in a gripping atmosphere. Slowly they are increasing the tempo to the accompaniment of dirty and murky guitar riffs, while its alarming guitar solos emerge to create a disquieting atmosphere which welcomed the arrival of Le Ventre Monde who introduced the jerky pattern and heavy structure. This song has soul on its dark dissonance that dominates every side of the song, while its deep atmosphere gives off an eerie aura, before La Tombe Avide comes to crush us under a wall of gloomy sound, where distortions and explosions take turns threatening us with a sinister palette of sounds, until the alarming outro leaves us in fright, then Miroir Decharne comes to disturb us with a harsh noise elements, this track has a more brutal and straightforward texture that built on a bunch of abrasive and nasty guitar riffs, disgusting vocals, solid drums, and heavy bass. This song moves aggressively like sharp harmonics that fit perfectly against an unhealthy base. Le Souffle Des Os, a track that has a very heavy and dense construction, they reveal some dark technicalities that fused with chaotic dissonance and shrouded in an unsettling atmosphere. Its raw guitar riffs suddenly stop and they offer a long and heavy pause with annoying noises, then blasted again with horrifying force towards the finale, right in front of Traitre A La Vie which comes with a very mystical and mysterious soundscpe, this track manages to terrorize us with its cruel dissonance and discordant melodic that slowly creates a long anxiety before Lueurs De Cendres comes to release its heavier and denser burdens while offering a dark and murky dissonance amplified by an eerie atmosphere that will slowly hypnotize us with an intoxicating rhythm. The album closes with Langues De Brume which contains slow and haunting notes that permeate every joint of our senses with a somber and murky dissonance. This track really gives stress and anxiety until the last moment that slowly disappears in the empty darkness.
L'abime dévore les âmes is an album that has a high level of darkness, they delivers a very bleak death metal form with a ornament of gloomy, somber and unsettling dissonance, some abrasive noise elements, and imbued with a harrowing and haunting atmosphere. The composition presented is truly unique, containing a bunch of filthy, dreary, murky, and nasty guitar riffs, horrific vocals, heavy bass, and devastating drums. The musical structure is heavy and aggressive with a hypnotizing and worrying rhythm. This is an album that brings fear, anxiety, and discomfort at the same time with the maximum level and sinister forces. You should try this stuff to get a different sensation and listening experience.