Review: Cosmic Putrefaction - Crepuscular Dirge For The Blessed Ones (2022) 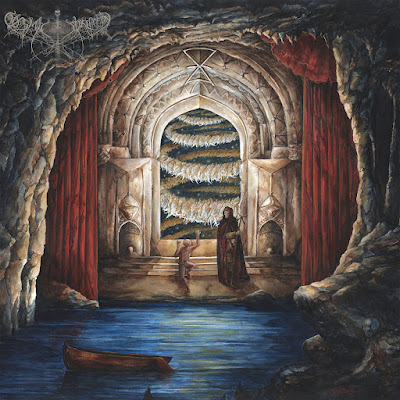 Cosmic Putrefaction is a death metal project that formed by Gabriele Garmaglia in 2018 at Milan, Italy. This project returns with the third album is called Crepuscular Dirge For The Blessed Ones that will released on May 6th, 2022 via Profound Lore Records.
The album opens with ...Through Withered Horizons, a worrying track that delivers an unsettling soundscape with the accompaniment of an eerie howl that evokes a gruesome and gripping atmosphere, before Sol's Upheaval Debris hits us with a heavy punch that's implemented into a series of sinister and evil guitar riffs, where its savagery continues to be etched through the grisly death metal attacks, and it continues in From Resounding Silence To The Obsidian Womb which imprison us with a loop of unsettling dissonance that creates a darkness that disturb our minds with its haunting melody, then Amniotic Bewilderment comes to torment us with its terrifying bursts of dissonance that spiked with some raw progressive elements, its grim and abrasive guitar riffs strung together with heavy bass and blaring drums, while its savage vocals constantly sow the seeds of hatred, the album continues with Lysergic Sulfuric Waters, a track that has a thick construction with crushing rhythms and stomping beats, they also sprinkle some dark and melancholic notes that make the composition sound even more sinister, while its incisive guitar leads reveal a cruel sonority that haunt us until the end, before Twisting Spirals In The Murk comes to reawaken the darkness to an even more harrowing level, they blanket its walls of sound with sombre melodies, while its instrumentation puts on an extraordinary show through a series of tireless and ferocious guitars riffs, fantastic bass, and dynamic drums, that conjured becomes an incredible dish that is able to arouse passion to keep burning, then Cradle Wrecked, Curtains Unfurled haunts us with somber dissonance, the rhythms are intoxicating with a solid foundation of fusion between wild technical and progressive elements. It's the longest track on the album, that allowing the band to make a wreak havoc with a basis of mounting anger. In this track we are also menaced by a soaring guitar solos that connect with some melancholic and dramatic synths that continue to create a fear that will always to loom, and the album closes with Crepuscular Dirge For The Blessed Ones which offers a murky and dreary soundscape that continues to terrorize us with its eerie energy, before a sinister howl of vocals emerges at the end of the song to blow all its anger before slowly fading away and disappearing into the void.
Crepuscular Dirge For The Blessed Ones is an astonishing show, through this album they explore and dig the craftmanship deeper than before, this time enriching its diverse sound with some unsettling dissonance, ferocious technicality, and abrassive progressives elements, they also deliver melancholic tones that stretches everywhere with a gripping atmosphere enveloped. In the arrangement terms, they've succeeded in form a terrifying threat through a barrage of vicious and somber guitar riffs, heavy bass, and aggressive drums, while its vocals continue to sow the seeds of hatred with vehement outbursts of anger. It's an album that has several dark sides that will continue to ensnare and haunt the listeners until death. This is a good stuff and worth checking out.