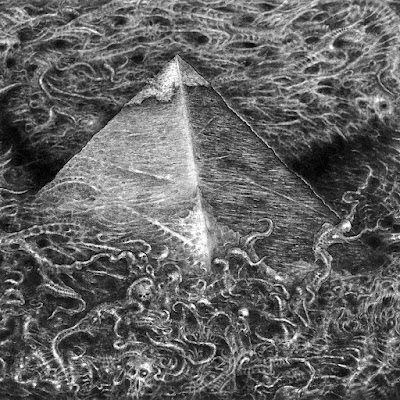 One of a lunatic technical brutal death metal band Encenathrakh are return with new album is called Ithate Thngth Oceate that was released on May 6th, 2022. This is the third album in their career so far.
The album opens with IcthkethtekhtcI that exploding insanity through its chatts music that is made up of dirty and filthy guitar riffs, insane bass, sloppy drums, and sleazy vocals. The music structure is really messy with a plot that is not easy to predict, then VvethkealaekhtevV bombards us with muddled guitar riffs to create an even more massive ruckus that supported with nasty vocals and shattered drums, followed by ThraagethraatetaarhtegaarhT which has a heavier structure by relying on a barrage of tangled guitar riffs to tear and make our hearing ragged, before GgorngthtgnrogG came to slaughter us with abusive technicality and brutality, where they mercilessly cram us a topsy-turvy guitar riffs intensely, while the bass playing was so incredible which load a crooked and irregular notes lines, that allowing the band to create rotten and grimmy sonorities. The album continues with KethencecnehteK, a wild track that filled with incoherent, smudged, and grubby guitar riffs that make the noise explode with unstoppable aggressiveness and executed with enigmatic rhythm, then AttkethencecnehtekttA offers us a messy and chaotic feast of brutality that backed by extremely crude and barbaric technicality, all executed in an unorthodox and difficult-to-digest manner, while CevealakcthraaarhtckalaeveC snaff us with a barrage of rowdy, soiled, and wild guitar riffs, abrasive bass lines, crushing drums, and disgusting vocals to reawaken the frenzy that would explode to the end, before Chronology Rejection Conjecture arrives to close the album with a very experimental outro, then slowly fades become the grains of emptiness to shake off all the madness and commotion that has created.
Ithate Thngth Oceate is a very lunatic album with incredible improvisation, they combine brutality and technicality with a very experimental and messy structure, where they are constantly bombarding and overwhelming us with a barrage of chaotic, filthy, odd, and complex guitar riffs, nasty and abusive bass, crushing drums, and disgusting vocals. Its tempo changes are always sudden so the plot is really hard to predict and understand. This is an album that requires more concentration for listeners to fully enjoy this album, because it has a texture that is difficult to digest and swallow.