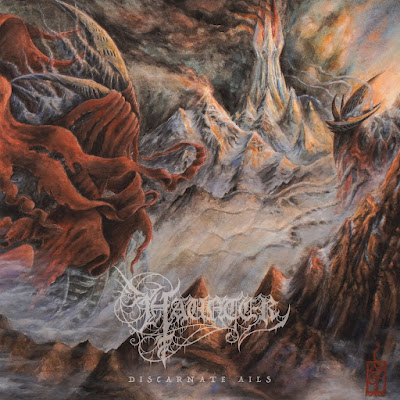 Haunter is a progressive black/death metal band that formed in 2013 at San Antonio, Texas. This band return with new album is called Discarnate Ails that was released on May 6th, 2022 via Profound Lore Records.
A scary melody was born from the deepest silence and then stretched to form a frightening terror in Overgrown With The Moss, a long and monumental track that opened this album with massive anger, we can feel it from its cruel vocal howl that pours all the furies into this track, then a dreary melody emerges to greet the bleaker vocals. There are some horror, mysterious, and gripping moments that they present through a series of dark and occult guitar works with some worrying dissonant rhythms and misleading plots. This track has a varied tempo, moving fast to crush us with its sharp aggressiveness and moving slow to drown us in grievous agony, before Spiritual Illness pierces us with sharp dissonance that smeared with a poisonous melody, this song has a heavy and tight structure with a very solid progressive foundation. In this track they continue to haunt us with a myriad of unsettling and disturbing guitar riffs that connected with heavy bass performances, energetic drums and fierce vocals. The album closes with Chained At The Helm Of The Eschaton, a nearly 14 minute long track that will continue to oppress us with its powerful energy to evoke darkness, sadness, and sorrow through a series of a painful melodic, brilliant progressive, and shocking dissonance. The rhythm that presented is really intoxicating which is attached to the structure of the music which is aggressive and vicious. We seem to be invited to dance and make peace with the anxiety and cruelty that will continue to lead us to a pathetic ending and anchor in an oppressive situation. It is a dramatic finale of a bleak journey that includes some scenes that will continue to haunt and linger in the hearts and minds of the listeners.
Discarnate Ails is a majestic masterpiece, it's an album that reaches the next level of their musicality featuring a fusion of black metal and death metal with worrying dissonance, brilliant progressives and haunting melodies. They're able to weave intricate and mysterious pieces together through a series of complex, incisive, dark, and occult guitar riffs, stellar bass performances, devastating drumming, and accompaniment by harrowing vocals. The songwriting is very aggressive with its heady rhythms and oppressive beats, while the production is sophisticated by finding a melodious balance on top of its fierce and challenging musical structure. This is an album that has the tremendous power of being able to evoke darkness, chaos, and emptiness at the same time with overflowing anger and emotions.