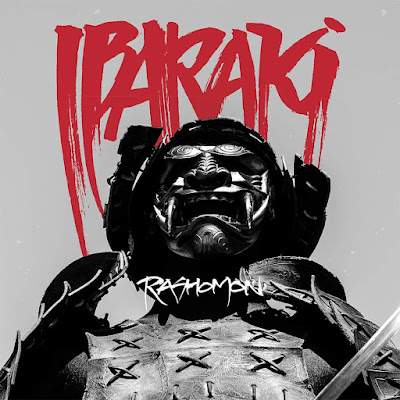 Ibaraki is an alterego project of Matt Heafy (Trivium), this project formed in 2021, and just released debut album is called Rashomon on May 6th, 2022 via Nuclear Blast Records. You will got a good mixture of progressive black metal and metalcore in this album.
The album begins with Hakanaki Hitsuzen, a mysterious introduction that reveals the worrying atmosphere behind its somber tone, then Kagutsuchi haunts us with its fast-paced rhythm complemented by several ethnic sampling and gruesome screams that reveal oppressive cruelty, then clean vocals emerge that are enchantedly delivered to offer an intense emotional depth, this track moves very effectively with several supporting aspects above a solid progressive foundations, followed by Ibaraki-Dōji which tames the worrying elements of black metal and then fuses to blend with the raw metalcore effectiveness, the track delivers a majestic and impressive piece of instrumentation backed by catchy and wide vocals to accompany its effective and aggressive rhythm, while Jigoku Dayū offers a serene intro through its epic acoustic guitar along with a soft clean vocals, but the calm and gentleness slowly fades became horrific when a screams of eerie vocals emerge with ever-growing rage. This track moves into a darker realm with its heavy music structure and catchy rhythm, then clean vocals reemerge at the end of the song but with the emotions already blown away, then Tamashii No Houkai makes the darkness sticking out again with a wave of its terrifying power and oppresses us with a series of sombre and heavy guitar riffs, tight bass, solid drums, and its dazzling vocal combination performances. This is one of my favorite tracks on this album because of its interesting structure with an extraordinary plot, capable of evoking imagination and emotion.
The album continues with Akumu that plunge us into misery and darkness that is constructed of a ghastly and haunting composition. We will continue to be raped by a barrage of aggressive, incisive, and complex guitar riffs with a soaring rhythms that hypnotize us with its intoxicating plots. In this track they present a guest vocals Nergal (Behemoth) which makes this track even more terrifying, while the Komorebi pamper and introduce us to a more majestic and raw soundscape that backed by epic and frosty instruments, allowing them to create a tranquil and peaceful sonority through a performance of clean, melancholy vocals before being spiked with darkness to be blasted off with a mounting fury, before Rōnin came along by inviting Gerard Way (My Chemical Romance) to attack us with his gruesome vocals. This is the longest track on the album which allows them to continue exploring with their madness and abilities to create an amazing composition with its charm of invigorating guitar solos, then Susanoo No Mikoto delivers a more violent composition with a heavy plot and unsettling rhythm. This track has a horrifying depth of emotion with a peaking rage. There is an interesting and unique moment on this track when the baroque music performance hypnotizes us with the accompaniment of a worrying chorus. They featured a guest musician Ihsahn (Emperor) who managed to give a great vibes and create a gripping atmosphere on this track, before Kaizoku arrives to close the album with its hypnotizing rhythm like a strange and quirky circus show that guided by dark clean vocals, allowing the band bring us to the end of that grotesque sweetness and provide an ominous atmosphere that shrouds us to the very end.
Rashomon is a majestic, wonderful, and theatrical show from a fusion of epic progressive black metal and raw metalcore. Everything in this album has executed with worrying plot and unsettling rhythm. This is an outburst of emotion and anger that has been buried for a long time and then exploded with a dark and aggressive musical structure that is composed very brilliant and extraordinary. Its an album that has fantastic and limitless ideas with a unique and interesting taste that born a climax satisfaction.