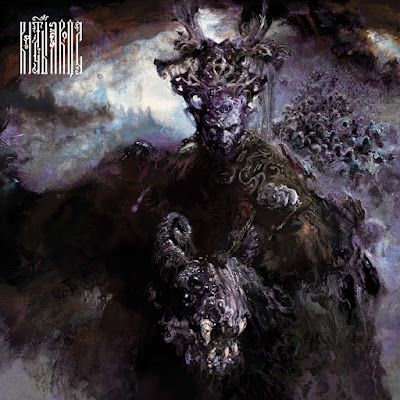 Katharos is a symphonic black/death metal band that formed in 2006 at Stockholm, Sweden. This band returns with new album is called Of Lineages Long Forgotten that was released on May 13th, 2022 via Willowtip Records.
The album opens with Those Hornclad with its mysterious and mystical introduction, taking us down the sinister black metal altar that accompanied by a glorious symphonic, where the performance of frosty and epic guitar riffs is so extraordinary that blends together with horrific screams of vocals and devastating drums, then Feigned Retreat comes with its gripping melody, they gush out rage with a piercing rhythm and challenging beat through this track that moves with fast and sharp guitar riffs and aggressive drums. They manage to combine a somber, poignant, and dramatic tone with more intense soft and melancholy elements that fused with a few touches of mysterious dissonance, while its chaotic guitar solos emerge to reveal the complex side that the band brings to tear us apart until the end, before Of Lineages Long Forgotten hits us with the heavy dissonance and majestic symphony that it puts into its aggressive introduction, this track has a solid structure with an immersive rhythm that is savagely executed through a series of thick and tight guitar riffs, heavy bass, drums punishing, and very evil drums. Then slowly this track slows down the tempo at the end of the song, followed by The World Serpent's Marrow which stomps with its terrifying energy, they strike us with the complexities of its epic melodies that fused together with some sharp technical touches, while its majestic symphonies offer the stronger and heavier sounds to form a solid sonority, then Lay Yersinian Siege comes with a worrying introduction and makes the darkness surround us again with an eerie atmosphere. They mercilessly oppress us with diabolical black metal compositions that shrouded with majestic orchestration and menacing melodies. The track is bolstered by the intensity of its vile vocals that blends perfectly into its fierce compositions, then the track continues to move towards darker and crueler realms and slowly penetrates the unhealthy boundaries that will continue to haunt us, before I Waged War hits us with its aggressive power, where ruthless guitar riffs, devastating drums, and horrifying vocals come together to create unstoppable violence and reveal an anger that has peaked that blasted with a fiery rhythm, and the album concludes with Most Dread Portent, a song that terrorizes us with its gloomy intro, where they incorporate some dark and melancholic notes with a somber atmosphere to lead us to the end of this dreary journey with great darkness.
Of Lineages Long Forgotten is an album that has a high capacity of darkness, they combine a diabolical black metal and abrassive death metal with a touch of grand symphony and orchestra, haunting melodies, unsettling dissonance, and some sharp technical elements. All of them are executed very aggressively through a series of sharp, dark, and epic guitar riffs, heavy bass, eerie vocals, and crushing drums. The songwriting is tight and solid with an oppressive rhythms and destructive beats. This is an album that evokes cruelty and fear with a sinister power that born from peaked and unstoppable anger.