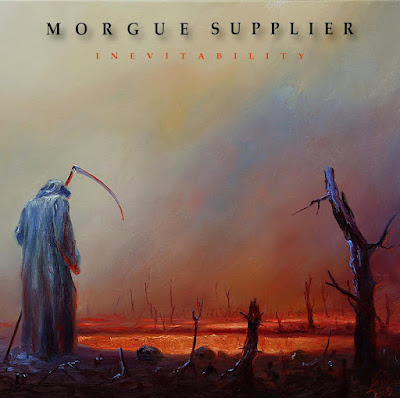 Morgue Supplier is a Deathgrind band that formed in 1999 at Chicago, Illinois, this band returns with the new album is called Inevitability that will released on May 13th, 2022 via Transcending Obscurity Records.
The album opens with Absurd Identity, a track that stomping straight away with a brisk and gloomy riff, where they blow their temper through this grisly composition, they deliver savage technical performances and some worrying dissonance that continues to overwhelm us with its aggressive structure, before Closing In forwarding the attack with a grotesque and grainy streak through a series of smoldering guitar riffs alongside energetic drums and disturbing vocals, they create an unsettling moment that shrouded in darkness with a sinister atmosphere, then a chaotic guitar solo pops up to welcome the part that are more depraved, then Empty Vacant Shell breaks through the darkness to reveal a hypnotizing complexity, they fuse some technical and dissonant elements which spouted with a lethal force that based by a strong progressive energy that slowly slows down creating a terrifying situation, before Departure appears providing a worrying interlude with a dark soundscape that shrouds through to the end, the album continues with My Path To Hell, a song that has a heavy, chaotic, and dangerous structure that transferred into the form of a fast and complex guitar riff with some unsettling dissonance that keeps moving to disturb our minds with its haunting melody, followed by Existence Collapsed with its aggressiveness that moves fast from the start then slows down bringing a sound of contrast between dissonance, technicality, and anger wrapped in a anesthezing rhythm that forms a deadly attack and connects us with Thoughts Of Only Darkness, the longest track on this album that still stands with its broad and dark instrumentation, they spit out some gloomy dissonance, vile technicalities, and harrowing melodies that overlaid with a mounting anger. In this track they are more free to explore their musicianship with weird, extreme, and chaotic sound that continues to be processed into a terrible dish, before Inevitability arrives to close the album with a mysterious ambient outro that moves straight and slowly plunges us into the void.
Inevitability is a grisly album that features a fusion of death metal and grindcore that filled with vile technicality, unsettling dissonance, and some haunting melodies. They are able to present a frightening terror through a series of dark, mysterious, chaotic, and weird tones that are poured in the form of fast and complex guitar riffs, heavy bass, devastating drums, and terrifying vocals. The songwriting is so unique with a musical structure that is aggressive, vicious, and dangerous. This is an album that will lead the listeners into a bleak realm with hatred and anger which pervading every part and slowly pushing us to the brink of collapse. Really sick album that need more concentration and focus to diggest this stuffs.