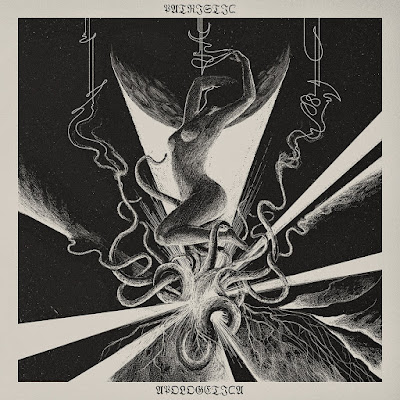 Patristic is a new dissonant black/death metal project that formed in this year at Rome, Italy featuring members of Hideous Divinity and Bedsore. The band just drop their debut record is called Apologetica on May 6th, 2022 via Pulverised Records.
Apologetica opens the album with a burst of unsettling dissonance that reveal the darkness through a series of somber and depressing guitar riffs along with heavy bass, and devastating drums. This track also evokes an eerie aura behind its sinister vocal howls, they are able to weave murky, moody, and dark notes with hypnotic rhythms and misguided beats that keeps moving with smoldering aggressiveness, then Praescriptio I following with its worrying energy, where dark dissonance is still a savage weapon to rip our minds apart with its vicious attacks, and slowly the song lows its tempo to create a haunting fear, before Praescriptio II arrived to close the album with its mounting rage, where they formed a final threat in full force with its dark and fast riffage, energetic drums, and fierce vocals. This song has an aggressive structure with a gripping atmosphere. Blast after explosion of gloomy dissonance continues to provoke and mislead our minds with its poignant rhythms, then slowly they lead us to a alarming finale and leave us in a space that full of misery and void.
Apologetica was a truly menacing debut, where they manage to deliver a sinister combination of black metal and death metal with an unsettling and worrying dissonance. They're able to weave some somber, moody, and dark tones into a haunting compositions with poignant and sadistic guitar riffs, tight bass, energetic drums and eerie vocals. The songwriting is so gloomy with misleading and depressing rhythms that executed with anger, aggressiveness, and cruelty that melts into evil music.