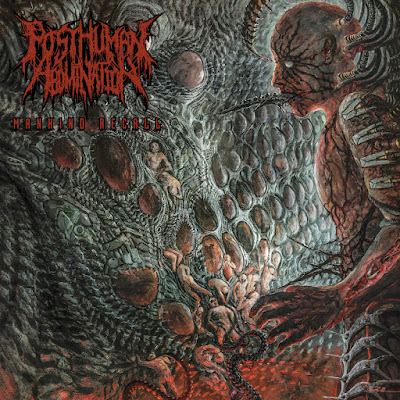 Posthuman Abomination is a technical brutal death metal that formed in 2014 at Italy, this band return and will release their sophomore album is called Mankind Recall on May 6th, 2022 via Comatose Music.
Subdermal opens the album with a mysterious introduction then greeted with a burst of heavy and dense guitar riffs that accompanied by fierce vocals and crushing drums, this song moves with a grinding rhythm and creates an oppression, before Abstracted stomping with a horrific energy, where they attack us with fast and incisive guitar riffs like a barrage of bullets that through our chests, while its vocals display incredible solidity with fantastic drums serving as a lethal rhythm controller, then Mankind Recall rages with a massive anger, they launch a dangerous attack with a combination of technicality and brutality as a lethal weapon to destroy us. The cruel beat is presented with an oppressive rhythm that is processed into an aggressive musical composition, what a sadistic tracks. The album continues with Zeroth, a song that can melt a velocity, ferocity, density, and complexity into something torturous. They relentlessly stab and slaughter us with vicious and barbaric guitar riffs with a foundation of savage brutality, then Muted comes to punish us with evil musical compositions, where brutality and technicality are the most terrifying aspects here with its lethal fusion into a terror that will plague us to death, followed by Mnesic which has a dense and heavy structure, also adopts the tightness and innovation of modern music that poured into its brutality that will continue to bombard us with vile technicality, before Null provide an anxiety by its dreary introduction, but that was only a mere distraction as the original ruthlessness was only brought to life through its torturous composition with a series of feral, intricate, and brutal guitar riffs along with cruel vocals, heavy bass lines, and devastating drums, and finally Shutdown arrives to close the album with an explosion blazing drums that accompanied by a parade of killer guitar riffs and savage vocals, it's an outburst of rage that has culminated with a lethal force that will continue to accompany us towards an oppressive ending.
Mankind Recall is an album that will bring the listeners to the threshold of destruction with a horrific mix of technicality and brutality, they present a lethal attack through a series of fast, sharp, and intricate guitar riffs that accompanied by solid vocal performances, amazing bass, and torturous drums. They are capable of controlling velocity, ferocity, complexity, and density which melt into lethal weapons to punish and exterminate us. The songwriting is really aggressive with crushing beats and oppressive rhythms. This is a terrible comeback from a beast monster that ready to devour us with its vile musical composition.