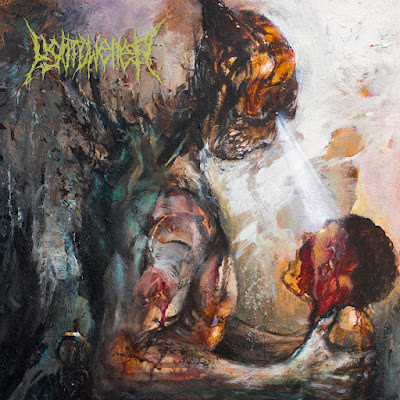 Light Dweller is a dissonant/technical death metal band that formed on 2017 at Tempe, Arizona by Cameron Boesch. This project return and released their fourth album is called Lucid Offering on June 21st, 2022 via Total Dissonance Worship.
The album opens with Succumb, a track that immediately exudes a violent dissonance that is enveloped in a gripping atmosphere with a strong technical aroma. They attack us with a series of sharp guitar riffs, straightforward vocals, and aggressive drums. This song has a strong structure with an unsettling plot that will poison our minds in a vicious way, then Lucid Offering following with a more powerful beat of dissonance, they endlessly gave torture through slashing deadly guitar riffs with fast and dense tempos, while the vocals presented fear like an explosive outburst of anger, the album continues with Conjurer Of Light, a track that breathes a dark dissonance, where a frightening aura radiates from beginning to end with complex guitar roars that continue to shower us with ruthless technical and wrapped with an aggressive drumming. Incantation Upon A Withered Entity is a track that has a heady rhythm, where at first this track moves at a slow tempo that presents dragging guitar riffs and then slowly the tempo jumps faster with high aggressiveness, like a ticking time bomb set to explode at the appointed time to bury us in the rubble of destruction through a sharp technicality, then Hominal comes with a dark dissonance wrapped in evil black metal elements. The song has a solid structure with its tight, sharp, and heavy guitar riffs along with terrifying vocals, great bass, and devastating drums that savagely executed with the spice of diabolical fury, while Kaleidoscope Of Thorns comes with a terrifying terror, they seem to plunge us into a dark prison full of torture and suffering that born from a series of chaotic, incisive, and murky guitar riffs, vicious vocals, and thunderous drums. The album closes with Spiritual Eclipse, a track that opens with a worrying intro and is enveloped in a gripping atmosphere, then moves on to feature a series of dark, savage, and vicious guitar riffs. The disturbing dissonance performance continues to haunt us with gloomy melodies and terrible technicalities, and slowly this song leads to a sad ending and buries us in a dimension shrouded in a sorrow and misery.
Lucid Offering is an album that has a great composition, they feature a straightforward death metal music with a mix of technical, dissonant, and black metal that is executed cruelly and mercilessly. The album features a series of chaotic, intricate, dark, and incisive guitar riffs along with eerie vocals, devastating drums, and excellent bass performances. The songwriting is truly extraordinary with varied tempos, intoxicating rhythms, and unpredictable musical structures that make us hypnotized by the sick musical presentation on this album. Yeah, this is a wonderful album with outstanding productios that worth to checking out, especially for the dark dissonance worshippers.